In this episode you will listen to three more short tales about meals with the boss.  I will talk about dinner team building,  a boss spilling wine on his shirt and being invited to the weding of the restaurant owners daughter.  All those ocured to me in different points of my career.  These are stories 10 to 12 of a series of twelwe I will be delivering in four episodes from which this is the fourth.

Hello and welcome tho the Business Trip Meal Podcast, My name is Mario Alvarez and I’m your host.  Today I will be reading the last three of twelve short tales I wrote about some experiences I had during my carreer that are about having a meal with the boss.  I have met several people in the role of direct boss or boss of another entitiy with wich I was collaborating.  Some interesting experiences occurred thanks to the interaction with those persons. 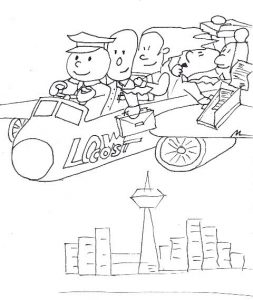 Costs reduction is a permanent concern for any company. This was no exception back in two thousand three when I started to work in Paris.  My first boss was relocated to Singapore only two months after my arrival and we got a new manager coming from the headquarters in Germany.  Mr. N. was now responsible for the French sales team composed by six sales people and a technician but also for the customer service team, three ladies located in Milan.  The work flow needed that the whole team met at least three times a year.  For the first meeting the new boss had the Italian colleagues come to Paris which meant three flights instead of eight if we had done the opposite.  Only, this option was too stressful for the customer service team because they needed to operate from the office and going back from a three day meeting trip generated a lot of cumulated work that was hard to catch up.  Mr. N. changed his strategy for the next meeting.  Since, from a business point of view, saving on flights was more expensive at the end because of the late work issue, he decided that the whole sales force would fly from Paris to Milan.  Sales people are used to follow up their job from their cellphones and laptops, the Italian ladies would not have to move and would be able to step out of the meeting if needed to attend urgent calls.  Regarding the flight costs Mr. N. had booked four months in advance a ticket for the whole team with the low cost airline Ryanair.  By doing so he flew the whole sales team by less than the cost of one regular flight.  It was not the most comfortable way to travel.  The day of the trip we met at the office to use only two company cars, we then drove for a couple of hours to reach the airport at Beauvais from where Ryanair operates.  We then flew to Bergamo and rented a minibus to drive to the office in Milan.  We had our two days meeting.  At the beginning Mr. N. acknowledged the team for the effort and said that we had managed to reduce the cost of the meeting dramatically and as a reward he had negotiated with his director a dinner for us at a very nice restaurant which would not change significantly the savings obtained by this new logistics.  From that day on that was the way we managed our meetings and always had a nice dinner at the restaurant La Ringhera.

The trip was a nice experience; we discussed business at the airports, called our customers as usual and had our sales meeting very motivated.  During our ritual dinner discussions would be more friendly and about family, hobbies, sports or other subjects not related to the dayly work.  On the flight back the good mood continued. We always landed quite late in Beauvais and drove back to the office still chatting about the trip, telling jokes or singing to a CD, we discovered that way that Mr. N. was fan of Sade; he knew all lyrics and had proven to be a smooth operator.

Lesson:  You can destroy or build a team with the same budget.

Tip: be a builder not a destroyer.

11 A solution provider is always appreciated 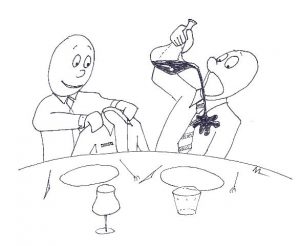 One of our business partners invited us to Barcelona for a big tech day in one of their facilities to present their new product line and to explain how the collaboration with our company was going to be in the future.  After a very effective meeting the hosts took us to a beautiful restaurant.  Food was fantastic, wine even better.  At the end of the meal the waiter proposed to try some kind of grapes based liquor.  It was very sweet kind of Porto.   The particular thing here was that no glasses were used.  That drink was inside a funny kind of bottle similar to a watering can, in Catalonia it is called Porrón.  You have to pour the wine on your mouth without touching the Porrón with your lips.  The operation seemed quite easy in the hands of the local colleagues but once passed to the rest of the team each one of us had to target carefully not to spill the wine.  We all passed the test but our boss.  When the bottle arrived to him he hesitated a little bit and then went for it too far from the bottle and spilled a good amount on his beautiful white shirt.  The color of the stain was almost as intense as the red face he had now.  There was an eternal silence of about a millisecond before every guest tried to do or recommend something.  Someone suggested using salt to absorb the wine, another one had experience cleaning red wine stains with white wine, a third one said that mineral water would do the thing.  During those minutes of collective hysteria one of the sales representatives of our partner had left the table, gone to his car and picked a spare shirt he had with him.  He came back and handed it to our boss with a smile, it’s a gift he said.  The boss went to the bathroom and changed.  When he came back we noticed the shirt had a little logo on the pocket, the logo of our partner.  The boss thanked the sales guy and said, “now I’m really in your team.”

Lesson:  The boss can also be clumsy.

Tip: Have an extra shirt with your company logo.

12 Thai Food and a wedding 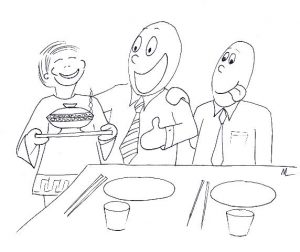 My first boss in Mexico was a fan of Thai food.  During the four years we worked and travelled together we shared many times lunch, breakfast or dinner.  We always shared the same passion for food, especially if it was spicy.  Every time we had a meal together was a fun event.  Mr. C. was a nice guy with a great sense of humor, additionally he always had a nice attitude towards people at the restaurants and he always made jokes or asked questions about the preparation of a particular dish or drink.  On one occasion we were visiting a subsidiary of our company in Detroit.  Mr. C. said he knew a great Thai restaurant nearby, the Bangkok Star.  We went there and had a fantastic lunch.  The boss suggested trying the Iced Thai Tea and then the beef gung bao.  Three levels of spice were possible, mild, hot and extra hot.  Of course he ordered extra hot and when the beef arrived he added some crushed peppers from a tray that was on the table.  I was cautious and ordered the mild version which already required having a thick skin.  Not to change his habits, Mr. C. talked to the waitress and asked questions about food, Thailand traditions and other subjects, he always managed to get long detailed answers people was delighted to give.  The whole week we had lunch at that same restaurant and at the end the waitress who was the daughter of the owner invited us to her wedding in three months.  We did not know if we could attend but it was nice to be asked, that was the effect Mr. C. had on people.

Lesson:  There is nothing better than a nice person with sense of humor that shows true interest in other people.

Thanks for listening I hope you enjoyed this anecdotes. These short stories were the last three of the set of twelve, I hope you liked the anecdotes.  In the next episode we will go back to the interview format to talk with a former salesman from Barcelona.  In the mean time I wish you good businesses, great trips and even better meals.  Goodbye.