In this episode you will listen to three more short tales about meals with the boss.  I will talk about planning a lunch for the boss, dinner with a macho boss and a casual talk with a big big boss.  All those ocured to me in different points of my career.  These are stories 7 to 9 of a series of twelwe I will be delivering in four episodes from which this is the third.

Hello and welcome tho the Business Trip Meal Podcast, My name is Mario Alvarez and I’m your host.  Today I will be reading three of twelve short tales I wrote about some experiences I had during my carreer that are about having a meal with the boss.  I have met several people in the role of direct boss or boss of another entitiy with wich I was collaborating.  Some interesting experiences occurred thanks to the interaction with those persons.

Business meals with your hierarchy. Cases 7-9 of 12. 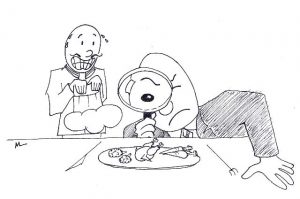 At one occasion, during the time I was working in the French office of my employer, I had to organize a nice lunch between two meetings.  My German boss was going to lead the meetings and my French boss was really busy organizing the whole event and asked for my help.  I had to take care of lunch.  We have to use the company’s catering service he said. Our building was nine stores high.  On the top floor there was a fancy area where lunch for customers could be organized, a chef was responsible for the meal and the wine.  I called this guy to book the date and ask for menu options.  He quickly mentioned a couple of French classics but insisted in preparing some kind of specialty based on cockerel.  In my mind I was sure that a chef would please any taste and accepted his suggestions.  The day of the meeting when lunch time came we took the lift to the ninth floor and sat in one of the rooms that had a huge window all along one side.  From there you could see the Seine and a huge portion of Paris, the sky was blue.  All guests were well impressed by the location. Food was not meant to be extravagant but we enjoyed a little bit of wine and a very nice starter.  It was nice at least for me.  The boss and part of the crew did not find it that good, but the biggest disappointment was caused by the cockerel.  It was prepared in a way that just an artist like the chef could understand; full of tastes that not necessarily everybody will like but the problem that I think most chocked the German part of the group was the small portion.  I noticed the boss was so pissed he did not even ask for a coffee or dessert.  When we had to leave for the next meeting he approached me specifically to complain, the chef noticed what was happening and looked confused.

Lesson: Only Steve Jobs had the magic to tell you what you like and you would agree.

Tip: Just ask the boss, send him the list of options and he will answer A, B or C and live with that.

At the end of the nineties the business unit director in Mexico had the reputation of being a macho in a macho land.  In one occasion I sat with him and other colleagues at the same table for dinner during a sales meeting.  I was two or three seats away from him but we had exchanged a couple of words and he was aware of my presence, the table was round, you could see everyone.  Dinner was very good and at the end we were proposed a last drink to “settle” food.  I asked for a Baileys on the rocks.  Immediately the Rhinoceros (his nick name) screamed “come on! don’t be a pussy have a tequila! What kind of old lady drink are you having?”  I was surprised by his reaction, to which I answered, “OK I will have the same you are taking”.  That was, no surprise, tequila macho, which consists of an habanero pepper smashed a little bit immersed in your tequila glass.  You are supposed to drink the liquid while you chew the pepper.  I did it and then, since the waiter had anyway brought the Baileys I raised my glass smiled to the boss and enjoyed my lady’s drink.  He laughed and said ” ay ay ay cabrón!”

Tip: Don’t be a pussy drink that Baileys.

9 A sandwich and coffee to go, for the member of the board 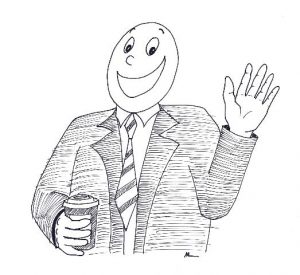 The headquarters of the company are in a huge industrial complex in Germany.  The place has several restaurants and cafeterias. As you might well know some lunch breaks need to be short so you can go back to your office and finish that report or presentation.  Many people will then visit the cafeteria to pick a drink and a sandwich to go.  At that time the place closest to my office was near the building where all members of the board had their offices.  In those days a former director of the Mexican branch had been appointed as member of the board after a rocketing career.  This guy and I had met a couple of times in different places and he always was kind and down to the earth.  He never failed to say hello and to ask if I was doing well.  The last time I saw him was in the mentioned cafeteria.  He was standing at the queue waiting to pay his sandwich and coffee.  I had been to the toilets to wash my hands before picking my food and as I went out Mr. H. recognized me and waved hello.  Considering he is very tall and recently became a big boss, his waving was quite notorious.  Everybody looked in my direction to see who he was saluting.  Suddenly silence, I approached and we chatted a little bit.  At the end I told that we were proud and that everybody remembered him with respect in Mexico.  As a joke I gave him a tap in the shoulder saying “good luck boy don’t let us down”.  To what he smiled and answered “I’ll do my best”.   That was cool, no arrogance no distance no looking at my watch because my time is valuable, a normal person.

Lesson: People at the top can be down to the earth too.

Tip: be transparent, be yourself.

Thanks for listening I hope you enjoyed this anecdotes. The next stories 10-12 will be published soon.  In the mean time I wish you good businesses, great trips and even better meals.  Goodbye.